This week: U-Boat through Straits of Gibraltar Competition Winner and the new competition: How do you get an RAF fighter to Berlin and back in July 1943?

Sorry for the hiatus in the last week: first I had a bad cold and then my fridge-freezer broke two days ago! Anyway I’m back.

How do you get an RAF fighter to Berlin and back in July 1943?
Since my post about getting a U-boat through the Straits of Gibraltar was my most popular yet, here is a similar post. Let me explain the mission: you need a fighter small enough to fly down Unter den Linden (the equivalent of Oxford Street in Berlin), carrying 1000 lb bombs. The fighter needs to be able to negotiate the Brandenburg gate and fly low over the Reich Chancellery garden and still manage to land somewhere far enough from Berlin that the pilot can safely get back to England. There is only one RAF fighter that could do all this in 1943: the Hawker Hurricane II.

Here is an image of a Hawker Hurricane II.

However the range of the Hurricane II was only 650 miles: that would barely even reach Berlin from Norfolk, let alone get you back. 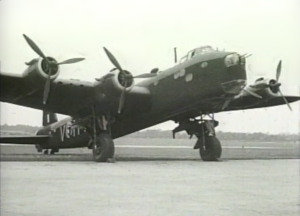 Of course the contemporary British heavy bombers could reach Berlin and the Lancaster and Stirling could each carry at least 10 tons of bombs that far. Shown here is Short Stirling.

If you have read my book Attack Hitler’s Bunker! or even read the synopsis you might have a clue how 700 Squadron does this for the daring mission in my book.

One possibility would be drop tanks: in 1943 the Germans had already used drop tanks on Stukas and were experimenting with them on Bf 109s. The Americans were also interested and about to introduce a drop tank on the P-47 Thunderbolt. A drop tank is a container attached to the bottom of either each wing or the fuselage which contains 200-500 gallons of fuel. This would extend the P-47 Thunderbolt’s range so that it could reach Berlin. However this wouldn’t actually become operational until September and the British had nothing similar at the time of the mission’s planning; July 1943.

How would you do it? Answers please by posting a comment here. Best answer gets a free eBook of December Radio when it is published this year.

U-Boat through Straits of Gibraltar Competition Winner
Daniel, the first to comment has won the competition and an Ebook of December Radio when it is published. Well done Daniel.

Apologies for the non-appearance of the guest post by Lifelongexplorer. Job commitments took precedence over blogging. Perhaps he will be able to post something soon.