An ex-spy wakes up in an inescapable 13th Century dungeon; no light, no food or water and no way out! 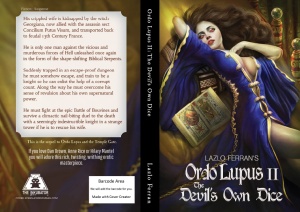 A psychic historian finds secret codes woven into an altar cloth and learns how to use the Temple Gates. But on a skiing holiday, his crippled wife is kidnapped by the witch Georgina, now allied with a murderous sect, and taken back to medieval France in this taut, dark thriller. He gambles with his life, chases the assassins and wakes up in an oubliette; a dungeon with no way out!

It’s pitch black, he doesn’t know his jailer or remember his name.

Could his captors be his arch-enemies; the Biblical shapeshifting Serpents?

The dice are loaded.

Where is he? Who put him here? How can he get out?

Can you face the fear… of total… darkness?

Shapeshifting, time travel and military conflict all come together in this richly plotted paranormal thriller

If you love the Da Vinci Code, or sexy witches, sexy vampires and sexy werewolves are your thing, you will adore The Devil’s Own Dice.

Buy Ordo Lupus II: The Devil’s Own Dice on Amazon.

From the Author
If you like any of my work please take a moment to like my Facebook page.
Much of what follows is similar to the artical about Ordo Lupus and the Temple Gate, for the simple reason that the second novel had its roots in the first novel. However, I wanted to develop those themes further, so if you have read the first novel and want to see the process that led to Ordo Lupus II: The Devil’s Own Dice, please read the last three paragraphs.

The roots of this novel are complex: they lie with my interests:

My previous novels had been largely reflections on aspects of my own life and commentary on social structures today. Even Infinite Blue Heaven – A King and A Queen was thus, because I had actually already married into the social structure of Kyrgysztan; the real-life geographical location for the novel.

My own family’s roots, uncovered gradually over ten years of concerted research had led me to one Guillaume; a Chevalier (Knight) in 13th Century Languedoc, France. He was my earliest ancestor. Simultaneously, I had been pursuing a theological interest in the Cathars; first through reading a number of books by Henry Lincoln and, later, an interest in Monségur and the Rennes-le-Château, near where the lost treasure of the Cathars is said to be hidden. The Cathars were an ancient sect who came to prominence and were ruthlessly persecuted by the Catholics in the 1300s, mainly in and around the Languedoc Region of France. Their beliefs were gradually imported from the Mediterranean via the Balkans and possibly originated in Paulian beliefs in post-Roman Istanbul (ancient Constantinople). They believed that the Christian god was really Rex Mundi, or ‘God of Earth’ and that he was an illusion created by dark forces, while the real God remains hidden somewhere outside Earth. I quite possibly sympathise with the Cathars, because my later ancestors probably escaped the Catholic persecution of Huguenots when they came to England in the 1500s.

These two areas of interest came together for me when I discovered that one of my ancestors was cast out by the Catholic Church and prosecuted for some unknown violation. It resulted in him having to pay the church an annual tithe of a man’s weight in wheat. What his misdemeanour was, I cannot say but he was certainly very wealthy and his daughter married well, so it must have been a personal crime against the Church. Was he a heretic or Cathar, even though officially they had all been killed in Monségur 200 years before? I may never know but it started a train of thought which led to me deciding to write a book about heresy in France, and the political implications for a country that was being slowly formed from part of the Frankish Empire.

A year before I started this work, I read both The Da Vinci Code and Angels and Demons by Dan Brown. These books were certainly an influence on me. Like him, I have been fascinated for many years by the rumour or myth that Mary went to France and that Jesus had a descendant. Like Brown and many others, I speculate that the Cathars did in fact smuggle a great treasure out of Monségur castle, under the noses of the Royalist besiegers. I also speculate on what that treasure might be and how it might affect our lives if it were discovered in the modern age.

Around the same time I was starting this work, my interest in the paranormal became focused around reincarnation and lycanthropy (werewolves and vampires). I have always loved old Hammer Horror films and particularly the work of Christopher Lee and Peter Cushing. I have also always been interested in luck, and the constant battle between good and evil, light and dark, and yin and yang; who isn’t? My own luck seems to run in phases or waves; periods of days or even weeks of good luck, followed by periods of very bad luck. I mused that some people have luck so bad that it kills them, whereas others seem to lead a charmed life. I decided that my main character, as well as being physically imperfect, must have some kind of rare interaction with luck and the forces of good and evil.

From there, I developed the idea that luck might have something to do with the effect of the battle between good and evil: that in fact both Satan and God might both have one hand on the tiller of luck.

Ordo Lupus II: The Devil’s Own Dice
This novel came about because the first was so popular! I felt I had to write more about the sect: Ordo Lupus. As it happens, it seemed easy to start because many strands in the first novel had been tantalisingly incomplete, for instance: the altar cloth; the femme fatale’s fate and the origins behind the Ordo Lupus organisation.

Imagining that The Serpents and the Concilium Putus Visum might not take too kindly to the events in Book I was not difficult and since my interest in High Medieval history (11th to 13th Century) had deepened, I felt comfortable describing where the tapestry might take someone if they managed to decipher it. I had also stumbled across fascinating descriptions ofOubliettes. I couldn’t resist thinking about what it might take to escape from one. Could it be done? What if it couldn’t be done? In fact, there is no recorded case in history of anyone ever escaping from an oubliette. I had to have the main character try. I actually spent nearly six months thinking about this before feeling able to put finger to keyboard. However, from here, the story had considerable momentum. At last, I could see how the Biblical references in Book I could turn into a form of time-travel for some of the characters, especially those initiated into Ordo Lupus.

I felt that it was time to explore the werewolf theme more thoroughly. The final first draft came to almost 100,000 words so unfortunately some of the more detailed historical exploration of this theme had to be dropped. A lovely section, set in 7th Century Ireland, also had to come out but it might put in an appearance at a later date.

During the two years since publishing Ordo Lupus and the Temple Gate, I had read much about 10th and 11th Century monastic life, particularly a book by Constance Brittain Bouchard called Holy Entrepreneurs and an academic tome on the Cathars called Heresy in Medieval France, 1000-1249 by Claire Taylor. I wanted to include this wonderfully complex and rich history in the new novel and there is also an encounter with William the Conqueror’s mother. The biggest battle of the 13th Century the Battle of Bouvines also features as one of the highlights and took much work to research for accuracy. So does he escape from an oubliette? You will have to read the novel to find out!

Buy Ordo Lupus II: The Devil’s Own Dice on Amazon. Buy the first book in the series, Ordo Lupus and the Temple Gate eBook on Amazon.

One thought on “The Devil’s Own Dice”